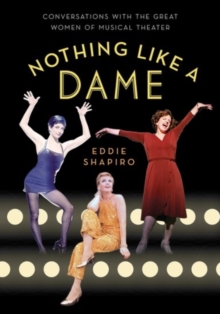 Nothing like a dame : conversations with the great women of musical theater

In Nothing Like a Dame, theater journalist Eddie Shapiro opens a jewelry box full of glittering surprises, through in-depth conversations with twenty leading women of Broadway.

He carefully selected Tony Award-winning stars who have spent the majority of their careers in theater, leaving aside those who have moved on or occasionally drop back in.

The women he interviewed spent endless hours with him, discussing their careers, offering insights into theiconic shows, changes on Broadway over the last century, and the art (and thrill) of taking the stage night after night.

Chita Rivera describes the experience of starring in musicals in each of the last seven decades; Audra McDonald gives her thoughts on the work that went into the five Tony Awards she won beforeturning forty-one; and Carol Channing reflects on how she has revisited the same starring role generation after generation, and its effects on her career.

Here too is Sutton Foster, who contemplates her breakout success in an age when stars working predominately in theater are increasingly rare.

Each of these conversations is guided by Shapiro's expert knowledge of these women's careers, Broadway lore, and the details of famous (and infamous) musicals.

He also includes dozens of photographs ofthese players in their best-known roles. This fascinating collection reveals the artistic genius and human experience of the women who have made Broadway musicals more popular than ever - a must for anyone who loves the theater.