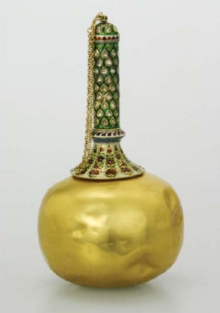 Gems and jewels of Mughal India

Part of the The Nasser D. Khalili Collection of Islamic Art series

Unfortunately, despite literary and pictorial evidence that the Mughals possessed and wore large numbers of priceless jewels, very little has survived today.

Despite a few recent exhibitions and publications, the subject is still very largely unexplored and the publication of the substantial holdings in the Nasser D.

Khalili Collection is therefore an event of some significance.

Prominent among these is a spinel ruby engraved with the names and titles of the Emperors Jahangir and Shah Jahan; as well as two carved emeralds of notable size and colour, also from the period of Shah Jahan or perhaps the early years of his son's reign.

These pieces are presented alongside a large number of 18th and 19th century enamelled and jewelled objects, and a wide range of items of personal jewellery that includes South Indian gold pieces of exotic form and excellent workmanship as well as turban ornaments and other pieces of Mughal design.

The detailed catalogue entries are accompanied by several essays exploring various aspects of Mughal precious objects and the materials they used.