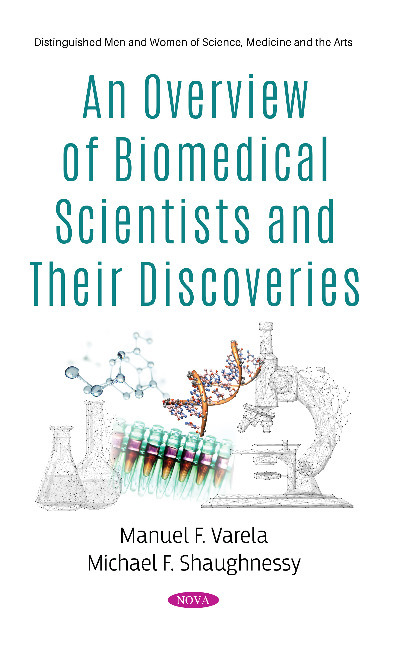 An overview of biomedical scientists and their discoveries

By: Shaughnessy, Michael F.(Edited by)

The world of medicine interacts with biology, anatomy, chemistry and physiology.

Thus, it takes an extremely talented scientist, scholar and researcher to unwrap and unravel the wonders and complexities of the human body and medical illness, pains and problems.

This book attempts to do just that and explain how many biomedical scientists and researchers were able to discover and treat various medical conditions as well as provide insights into the therapeutic process.

Some of the words readers will encounter in this book strike fear into the hearts of physicians and nurses everywhere -- cancer , gout, high cholesterol, catecholamine's, viruses, bacteria, malaria, typhoid, and other ailments.

Blood, cells, stem cells, insulin, the immune system and mutagenesis are all involved in the optimal functioning of the human body, yet the average person knows little about blood, the basic of the cell structure, how it operates and what it does in the human body in terms of promoting health and human functioning.

Diabetes, Huntington's, cancer are all ailments that impact the human species more or less and, in many instances, result in death.

Yet who were the scientists that researched and discovered these ailments and maladies and how did they first analyse the relationship between these illnesses and the human body?

Where did they come from? How did they occur? How can we address these illnesses and difficulties so as to live a fruitful robust life?

We hear so much about the human genome continually in scientific circles, yet the general public has little understanding of it and in fact, the average citizen knows little about their genetic structure and how it has impacted their lives.

Even physicians are only minimally trained in the complexities of genetics, but this text offers at least some introductory information as to this "brave new world" of the human genome and its relevance.

Statins is a simple word but one that is imperative to understand and salient to our heart, continued existence and well-being.

Homeostasis is, again, a simple word, yet we should learn about it and its importance in our daily functioning and understand it as a basic element of our existence.

While it seems a basic concept, it is imperative for human optimal functioning. And of course, the cell -- one of the building blocks of the human body -- the surface of the cell, and all of the magical mysteries that revolve around this basic element of the human body, are important elements for scientists, scholars and researchers to understand and grasp.

The book is a journey into the lives of famous scientists and scholars who went on to win the Nobel Prize, even though many were rejected by many medical schools.

These scholars -- both men and women -- went on to achieve great things and survive difficulties, discrimination and dire straits.

It is only right, just and proper that these famous men and women should be recognised for their contributions to science, medicine and humanity.