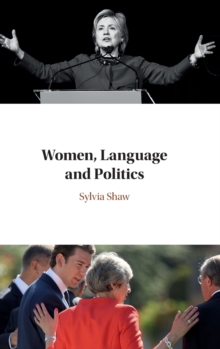 By: Shaw, Sylvia (University of Westminster)

This book addresses the problem of the underrepresentation of women in politics, by examining how language use constructs and maintains inequality in political institutions.

Drawing on different political genres from televised debates to parliamentary question times, and fifty interviews with politicians between 1998 and 2018, the book identifies the barriers and obstacles women face by considering how gender stereotypes constrain women's participation, and give them additional burdens.

By comparing the UK House of Commons with newer institutions such as the Scottish Parliament, the National Assembly for Wales, and the Northern Ireland Assembly, it asks: how successful have newer institutions been in encouraging equal participation?

What are the interactional procedures that can be thought of as making an institution more egalitarian?

It also explores the workings and effects of sexism, fraternal networks, high visibility in the media, and gendered discourses, through detailed case studies of Theresa May, Julia Gillard and Hillary Clinton.