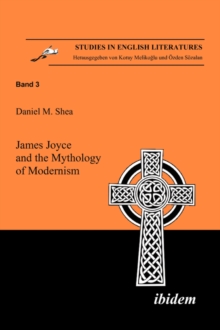 James Joyce and the Mythology of Modernism

"James Joyce and the Mythology of Modernism" examines anew how myth exists in Joyce's fiction.

Using Joyce's idiosyncratic appropriation of the myths of Catholicism, this study explores how the rejected religion still acts as a foundational aesthetic for a new mythology of the Modern age starting with "A Portrait of the Artist as a Young Man" and maturing within "Ulysses".

Like the mythopoets before him-Homer, Dante, Milton, Blake-Joyce consciously sets out to encapsulate his vision of a splintered and rapidly changing reality into a new aesthetic which alone is capable of successfully rendering the fullness of life in a meaningful way.

Already reeling from the humanistic implications of an impersonal Newtonian universe, the Modern world now faced an Einsteinian one, a re-evaluation which includes Stephen's awakening from the "nightmare" of history, a re-definition of deity, and Bloom's urban identity. Written with both the experienced Joycean and the beginner in mind, this book tells how the Joycean myth is our own conception of the human being, and our place in the universe becomes (re)defined as definitively Modernist, yet still, through Molly Bloom's final affirmation, profoundly human.