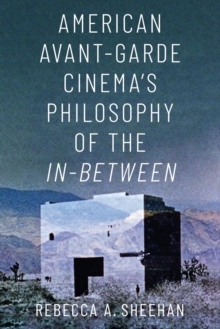 Can films philosophize rather than simply represent philosophical ideas developed outside of the cinematic medium?

Taking up this crucial question for the emergent field of film philosophy, American Avant-Garde Cinema's Philosophy of the In-Between argues that the films of the American avant-garde do in fact do philosophy and illuminates the ethical stakes of their aesthetic interventions.

Author Rebecca A. Sheehan contends that American avant-garde cinema'scharacteristic self-reflexivity is an interrogation of the modes and stakes of our engagement with the world on and beyond the screen.

The book demonstrates this with the theory of the in-between: a pervasive figure that helps clarify how avant-garde cinema's reflections on the creation of images constructan ethics of perception itself, a responsibility to perpetuate thought in an enduring re-encounter with the world and with meaning's unfinished production.

The book is structured by a taxonomy of the multiple in-betweens evident in American avant-garde filmmaking.

Rather than systematically seeking reproductions of particular philosophers' ideas in avant-garde films, Sheehan derives categories of analysis and the philosophical claims they disclose from close readings of the films themselves.

The chapters of this book trace three modes of the in-between that function philosophically in American avant-garde cinema: the material, the dimensional, andthe conceptual.

Although the chapters are organized around discrete aesthetic and philosophical preoccupations that unify several filmmakers, these three presentations of the in-between cut through all the chapters, allowing the subjects of each to converse over the course of the book.