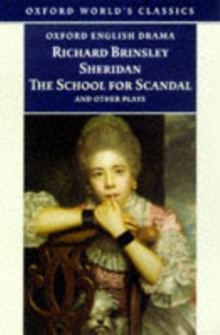 The school for scandal and other plays

Richly exploited comic situations, effervescent wit, and intricate plots combine to make Sheridan's work among the best of of all English comedy.

The School for Scandal (1777) is his masterpiece, a brilliantly crafted comedy of contrasts in which brothers Joseph and Charles Surface contend for Maria, with hilariously differing intentions and results. Also a work of acute comic irony, The Rivals satirizes the romantic posturing of Lydia Languish while her disguised suitor Captain Absolute's resourceful contrivances advance an ever inventive and skilfully wrought plot.

Included in this edition are the opera play The Duenna and the rarely printed musical play A Trip to Scarborough, adapted from Vanbrugh's The Relapse. Sheridan's last play, The Critic, is an exuberant parody of the modish tragic drama of the day.

The texts of the plays have been newly edited by the General Editor of the Oxford World's Classics English Drama series.A fine introduction and notes on Sheridan's playhouses and critical inheritance make this an invaluable edition for study and performance alike.

The title has been replaced.To check if this specific edition is still available please contact Customer Care +44(0)1482 384660 or schools.services@brownsbfs.co.uk, otherwise please click 9780199540099 to take you to the new version.