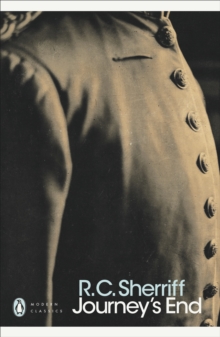 Hailed by George Bernard Shaw as 'useful [corrective] to the romantic conception of war', R.C. Sherriff'sJourney's Endis an unflinching vision of life in the trenches towards the end of the First World War, published in Penguin Classics.

Set in the First World War,Journey's Endconcerns a group of British officers on the front line and opens in a dugout in the trenches in France. Raleigh, a new eighteen-year-old officer fresh out of English public school, joins the besieged company of his friend and cricketing hero Stanhope, and finds him dramatically changed. Laurence Olivier starred as Stanhope in the first performance ofJourney's Endin 1928; the play was an instant stage success and remains a remarkable anti-war classic.

R.C. Sherriff (1896-1975) joined the army shortly after the outbreak of the First World War, serving as a captain in the East Surrey regiment. After the war, an interest in amateur theatricals led him to try his hand at writing. Following rejection by many theatre managements,Journey's Endwas given a single performance by the Incorporated Stage Society, in which Lawrence Olivier took the lead role. The play's enormous success enabled Sherriff to become a full-time writer, with plays such asBadger's Green(1930),St Helena(1935), andThe Long Sunset(1955); though he is also remembered as a screenplay writer, for films such asThe Invisible Man(1933),Goodbye Mr Chips(1933) andThe Dam Busters(1955).

If you enjoyedJourney's End, you might like Robert Graves'sGoodbye to All That, available in Penguin Modern Classics.

'Its unrelenting tension, and its regard for human decency in a vast world of human waste, are impressive and, even now, moving'
Clive Barnes