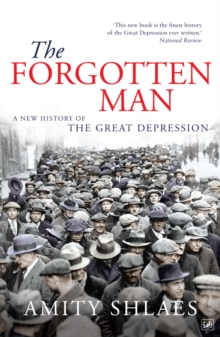 The forgotten man : a new history of the Great Depression

Challenging conventional history, Amity Shlaes offers a striking reinterpretation of the Great Depression that devastated America in the early part of the twentieth century.

She shows how both Presidents Hoover and Roosevelt failed to understand the prosperity of the 1920s and heaped massive burdens on the country that more than offset the benefit of New Deal programs.

From 1929 to 1940, federal intervention helped to make the Depression great by forgetting the men and women who sought to help themselves.

In this illuminating work of history, Shlaes follows the struggles of those now forgotten people, from a family of butchers in Brooklyn who dealt a stunning blow to the New Deal, to Bill W., who founded Alcoholics Anonymous, and Father Divine, a black cult leader.

She takes a fresh look at the great scapegoats of the period, from Andrew Mellon to Sam Insull of Chicago.

Finally, she traces the mounting agony of the New Dealers themselves.

Authoritative, original, and utterly engrossing, The Forgotten Man reveals how those dark years shaped both current political challenges and the strong national character that helps Americans to confront them.