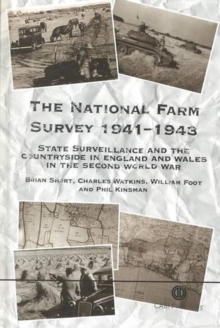 National Farm Survey 1941-43 : State Surveillance and the Countryside in England and Wales in the Second World War

During the Second World War, there was concern as to whether Britain, unable to import food from abroad, would be able to feed the population.

Therefore, the National Farm Survey was conducted during 1941-43, and described every farm in England and Wales in great detail. Because of its sensitivity, this material only became publicly available in 1992 after a fifty-year closure period.

Information on farming types, cropping and stocking, machinery, employment, farm size and structure, land ownership and farm buildings was provided for all farms which were larger than 5 acres at that time.This book gives an overview of the Survey, and provides the most complete 'Doomsday' of British agriculture available, including maps and illustrations of the areas surveyed at that time.

It is a unique source for measuring post-war changes in agriculture, environment and society.