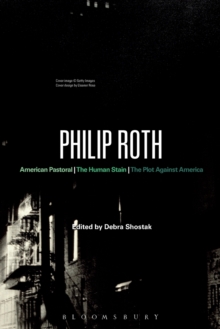 This title is a collection of original essays on Philip Roth offering contemporary critical readings and assessments of recent texts.

Philip Roth has without doubt been one of the most important writers of fiction in the United States during the latter part of the twentieth century.

The volume illuminates Roth's multilayered perceptions of twentieth-century America as a place, a culture, and an idea that shapes its inhabitants in profound ways.

The contributors probe this American Jewish writer's insights into the paradoxes of freedom and self-determination, the politics of identity, especially as defined by racial or ethnic affiliation, and the possibilities available for self-definition and transformation within the context of American history and culture. This series offers up-to-date guides to the recent work of major contemporary North American authors.

Written by leading scholars in the field, each book presents a range of original interpretations of three key texts published since 1990, showing how the same novel may be interpreted in a number of different ways.

These informative, accessible volumes will appeal to advanced undergraduate and postgraduate students, facilitating discussion and supporting close analysis of the most important contemporary American and Canadian fiction.