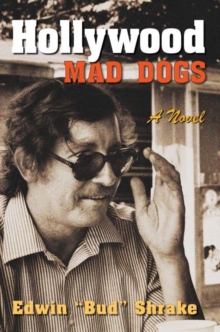 Before his death in 2009, legendary Texas author Edwin 'Bud' Shrake completed a final novel based on his real-life adventures as a Hollywood screenwriter in the 1970s and '80s.

In this new book, we meet screenwriter Richard Swift, who has been lured away from his cushy job at Sports Illustrated to write a movie for Jack Roach, a matinee idol famous for his electric blue eyes, dimpled chin, and a swagger that makes women swoon.

As Swift and his new movie star buddy hurtle through days and nights of Hollywood madness, Shrake's crystalline prose purrs like a Lamborghini speeding along the Pacific Coast Highway.

There are spies and fake houses, mountains of drugs, weird sex, crimes, and bizarre feuds.In Hollywood Mad Dogs, Shrake deftly satirizes a world where a screenwriter is supplied with a bag of cocaine and given a week to write a script, a star demands that a pet cat be his sidekick on the trail, and two competing box office titans square off on a golf course, 'each of them armed with a putter.'This rollicking new novel, discovered among Shrake's literary papers at the Wittliff Collections, provides a hilarious and insightful look at the Hollywood meat grinder.

It is a story only Bud Shrake could tell, and it is a worthy addition to the author's celebrated career, which includes some of the most highly praised novels written by a Texan.