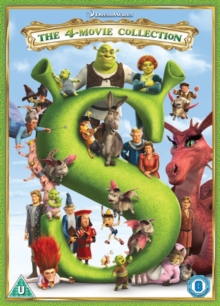 All four chapters of the post-modern animated comedy-fantasy following Shrek (voice of Mike Myers), a reclusive ogre living in a swamp on the edges of a fairytale kingdom.

In 'Shrek' (2001), the vain yet diminutive ruler of the land, Prince Fahrquaad (John Lithgow) decides to streamline his kingdom by getting rid of all the fairytale characters who promptly decamp to live in Shrek's swamp.

Faced with these unwanted tenants Shrek strikes a deal with the Prince, promising to find and return with Princess Fiona (Cameron Diaz), marriage to whom will finally confer on the Prince his kingly status.

In return the Prince promises to evict the various characters living on Shrek's land.

Shrek's task is further irritated by the unwanted company of a tirelessly wise-cracking Donkey (Eddie Murphy), and while their adventure bears all the hallmarks of a classic fairytale, nothing in 'Shrek' turns out quite like you expect.

In 'Shrek 2' (2004), Shrek returns from his honeymoon with his bride Princess Fiona to find an invitation from Fiona's parents, King Harold (John Cleese) and Queen Lilian (Julie Andrews) asking the newlyweds over to the Land Far, Far Away for dinner.

On their arrival, they find that the King and Queen are less than pleased to see their daughter hitched to an affable green ogre, and looking rather the worse for wear herself compared to her former dazzling royal brilliance.

When reminded by a conniving Fairy Godmother (Jennifer Saunders) of an ancient deal to match Fiona with her son, the vain and pompous Prince Charming (Rupert Everett), Shrek's new in-laws and their accomplices pull out all the stops to rid their kingdom of Shrek and restore their daughter to her former beauty - including hiring the services of notorious swashbuckling ogre-slayer Puss-in-Boots (Antonio Banderas).

Murphy also reprises his role as the faithful Donkey.

In 'Shrek the Third' (2007), when his frog-in-law suddenly croaks, Shrek embarks on another whirlwind adventure with Donkey and Puss in Boots to find the rightful heir to the throne, the awkward Arthur (Justin Timberlake).

Unfortunately the envious Prince Charming has designs on the throne himself, joining with other fairytale villains in a coup d'etat to seize the crown.

Can Shrek, with a magically misguided Merlin (voice of Eric Idle), a powerful posse of princesses, and a bundle of unexpected arrivals, manage to save the day?

In 'Shrek: Forever After - The Final Chapter' (2010), after all of his many and varied adventures, Shrek has finally settled down to become a domesticated family ogre.

Yearning for the days when he felt like a real ogre, Shrek is duped into signing a pact with smooth-talking wheeler-dealer Rumpelstiltskin (Walt Dohrn).

He immediately finds himself plunged into a twisted alternate version of Far Far Away where ogres are hunted, Rumpelstiltskin is king, all his friends have completely different personalities, and Shrek and Fiona have never even met.

It is now up to Shrek to save his friends, restore his world and reclaim his One True Love.