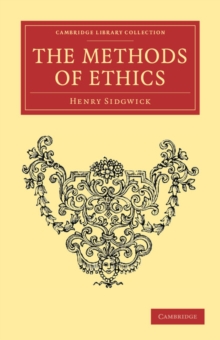 The Methods of Ethics

One of the most influential of the Victorian philosophers, Henry Sidgwick (1838-1900) also made important contributions to fields such as economics, political theory, and classics.

An active promoter of higher education for women, he founded Cambridge's Newnham College in 1871.

He attended Rugby School and then Trinity College, Cambridge, where he remained his whole career.

In 1859 he took up a lectureship in classics, and held this post for ten years.

In 1869, he moved to a lectureship in moral philosophy, the subject where he left arguably his greatest mark when he produced this work, regarded as his masterpiece.

It remains a valuable introduction to the philosophy, practice and history of ethics.

This reissue includes the 1877 supplement.