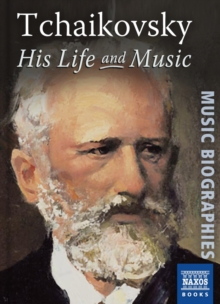 Tchaikovsky: His Life and Music

Tchaikovsky is one of the most popular composers who ever lived.

He is also one of the most misunderstood, as both man and musician, and looks destined to remain among the most controversial.

Widely misrepresented as an emotional voluptuary and typecast as a 'crazy Russian genius', he was, in fact, a highly disciplined and masterly craftsman of pronounced classical leanings, and a man whose volatile and hypersensitive temperament was as much his friend as his enemy.

His life was lived at the extremes, and fuelled by passions of almost every kind.

This much is evident in his music, which plays a vital part in this absorbing portrait, as do the words of the composer and his contemporaries.

Here we meet the composer in the context of his times.

We also meet a man of compelling humanity, sensibility and humour.