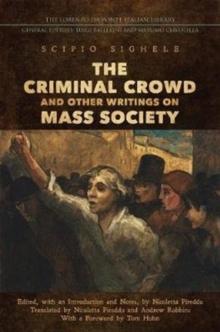 The Criminal Crowd and Other Writings on Mass Society

The Criminal Crowd and Other Writings on Mass Society is the first collection in English of writings by Italian jurist, sociologist, and cultural and literary critic Scipio Sighele (1868-1913).

In post-unification Italy and internationally Sighele was an important figure in contemporary debates on such issues as popular unrest, the problematic borders between individual and collective accountability, the role of urbanization in the development of criminality, and the emancipation of women.

This volume draws an intricate portrait of a provocative thinker and public intellectual caught between tradition and modernity in fin de si cle Europe.

It features new English translations of Sighele's seminal work, The Criminal Crowd, along with a selection of his later studies on criminality and on individual and group behaviour.

Nicoletta Pireddu's introduction and annotation provide valuable context and insights on Sighele's contribution to the emerging field of collective psychology, on his relationships with his predecessors Cesare Lombroso and Enrico Ferri and with his French rivals Gustave Le Bon and Gabriel Tarde, and on the significant scientific, literary, and cultural developments of his time.