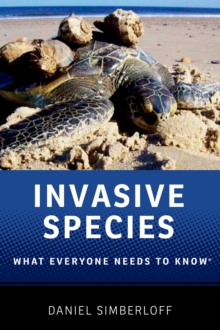 Invasive species: what everyone needs to know

Part of the What Everyone Needs to Know series

Of the 7,000 estimated non-native species present in North America, approximately 1,000 are invasive.

Clearly, invasive species are in the minority, but their small numbers don't keep them from causing billions of dollars in economic and ecological harm each year.

Policymakers and ecologists continue to try to figure out which species might be harmful, which invasive species are doing the most damage, and which of these might respond best to eradication efforts.

Invasive species reports and case studies are prevalent in political, environmental, and scientific news cycles, and a significant portion of the public is concerned about the issue.

He then moves on to the direct and indirect impacts of the impacts of invasive species on various ecosystems, such as habitat and resource competition, how invasive species transmit pathogens, and how introduced plants and animals can modify a habitat to favor other non-native species.

Simberloff's final chapters will discuss the evolution of invasive species, the policies we currently have in place to manage them, and future prospects for controlling their spread.

The book will also contain a section dedicated to the more controversial topics surrounding invasive species: invasive natives, useful non-native species, animal rights versus species rights, and non-native species' impacts on the biodiversity of an ecosystem.