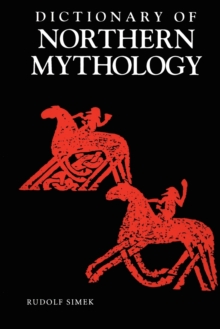 By: Simek, Rudolph,  Hall, Angela(Translated by)

For two and a half thousand years, from 1500 BC to AD 1000, a culture as significant as the classical civilisation of the Mediterranean world settled an immense area in northern Europe that stretched from Iceland to the Black Sea.

But the sources of our knowledge about these societies are relatively few, leaving the gods of the North shrouded in mystery.

He has adhered throughout to a broad definition of mythology which presents the beliefs of the heathen Germanic tribes in their entirety: not only tales of the gods, but beings from lower levels of belief: elves, dwarfs and giants; the beginning and end of the world; the creation of man, death and the afterlife; cult, burial customs and magic - an entire history of Germanic religion.

Rudolf Simek is Professor of Medieval German and Scandinavian literature at the University of Bonn in Germany.