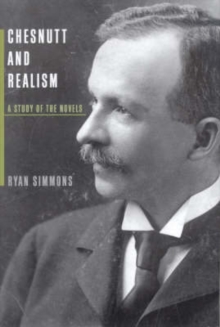 Chesnutt and Realism : A Study of the Novels

Part of the Studies in American Literary Realism and Naturalism series

With the release of previously unpublished novels and a recent proliferation of critical studies on his life and work, Charles W.

In ""Chesnutt and Realism"", Ryan Simmons breaks new ground by theorizing how understandings of literary realism have shaped, and can continue to shape, the reception of Chesnutt's work.

Although Chesnutt is typically acknowledged as the most prominent African American writer of the realist period, little attention has been paid to the central question of this study: what does it mean to call Chesnutt a realist?

A writer whose career was circumscribed by the dismal racial politics of his era, Chesnutt refused to conform to literary conventions for depicting race.

Nor did he use his imaginative skills to evade the realities he and other African Americans faced.

Rather, he experimented with ways of portraying reality that could elicit an appropriate, proportionate response to it, as Simmons demonstrates in extended readings of each of Chestnutt's novels, including important unpublished works that have been overlooked by previous critics.

By taking Chesnutt seriously as a contributor to realism, this book articulates the strategies by which one African American intellectual helped to define the discourses that influenced his fate.