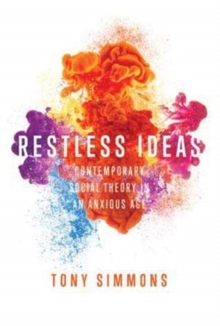 How do we make sense of the rise of political strongmen like Trump and Erdogan, or the increase in hate crimes and terrorism?

How can we understand Brexit and xenophobic, anti-immigrant sentiments and policies?

More importantly, what can we do to make it all stop?In Restless Ideas, Tony Simmons illustrates how social theory provides us with the skills for more informed observation, analysis and empathic understanding of social behaviour and social interaction.

Social theory deepens our understanding of the world around us by empowering us to become practical theorists in our own lives. Simmons traces the roots of contemporary social theory back to the works of the early structural functionalists, systems theorists, conflict theorists, symbolic interactionists, ethnomethodologists and sociobiologists - and incorporates contemporary social thinkers theorizing from the margins who are redefining the canon.

The politics of sexual, racial, Indigenous and ethnic minorities are analyzed through the prism of theoretical perspectives such as queer theory, standpoint and intersectional theory, postcolonial and Indigenous theory and critical race theory, while the ongoing struggles for gender equality and justice are examined through the generational perspectives of feminist theories.