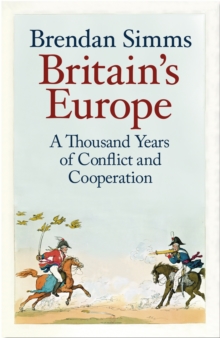 Britain's Europe : a thousand years of conflict and cooperation

'A dazzling perspective on the EU referendum debate' Prospect MagazineBritain has always had a tangled, complex, paradoxical role in Europe's history.

It has invaded and been invaded, changed sides, stood aloof, acted with both brazen cynicism and the cloudiest idealism.

Every century troops from the British isles have marched across the mainland in pursuit of a great complex of different goals, foremost among them the intertwined defence of parliamentary liberty in Britain and the 'Liberties of Europe'.

Dynastically Britain has been closely linked to countries as varied as Spain, the Netherlands, Germany and France. In this bracing and highly enjoyable book, Brendan Simms describes the highlights and low-points in the Euro-British encounter, from the Dark Ages to the present.

The critical importance of understanding this history is shown in the final chapter, which dramatizes the issues around British relations with the European Union and the how, far from being a narrowly legalistic or financial concern, a referendum on continued membership raises all kinds of fascinating questions about both the United Kingdom's own horizons and what it can offer to the Union's vision of itself. Britain's Europe is a vital intervention at a moment of both great danger and great opportunity.