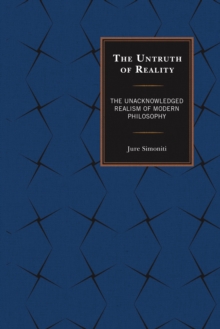 The Untruth of Reality : The Unacknowledged Realism of Modern Philosophy

The common feature of many present-day "new realisms" is a general diagnosis according to which, with Kant, Western philosophy lost any contact with the outside world.

In The Untruth of Reality, Jure Simoniti, in contrast, points out the necessary realist side of modern philosophy, arguing that the possibility of realism has always been there.

The epistemological self-inauguration of the subject goes hand in hand with his anthropological dethronement, the god-like centrality of the "ego" is constantly counterbalanced with his creatural marginality, the activity of the constitutive subject is juxtaposed with the growing indifference of the world, and the linguistic appropriation of the world simultaneously performs operations of the de-symbolization of reality.

However, with these precarious equilibria, the conditions of possibility of realism have become more complex and intricate.

It is therefore the goal of this book to demonstrate how the paradigms of consciousness and language are not necessarily incompatible with realism, but rather open new and broader possibilities for the world behind and beyond consciousness and language to disclose itself. This book will be of interest to graduate students and scholars in the fields of German idealism, continental philosophy, philosophy of language, and philosophy of science.