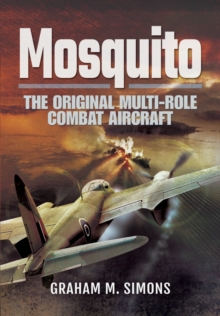 During the course of aviation history, there have been very few aircraft that have achieved immediate success when entering front-line service.

The arrival of the de Havilland Mosquito brought with it a degree of instant success that set it apart from a host of other aircraft.

It was not designed to an RAF requirement, but was the result of an initiative of the designers and builders to utilize the skills of woodworkers and the relative abundance of wood in the crisis years of World War II.

The result was an aircraft that could be built quickly, was extremely fast and immensely versatile.

Pilots loved it and the opportunities opened up to them as a result of the capabilities of this new and exciting aircraft.

Here, Graham Simons describes in detail how the de Havilland Mosquito was built, utilizing many rare photographs from the design studio and production lines.

It illustrates and explains the many different roles that the aircraft took as the war progressed.

Fighter, bomber, reconnaissance, night fighter - there were few tasks that this brilliant design could not adopt.