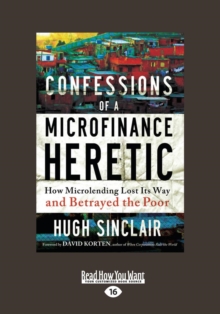 Confessions of a Microfinance Heretic

Offering inspiring success stories, the microfinance industry depends on the faith of investors that small loans can transform the lives of the poor.

But as Hugh Sinclair points out, very little solid evidence exists that microloans make a dent in long - term poverty.

Evidence does exist for negligence, corruption, and methods that border on extortion.

Part expose, part memoir, and part financial detective story, this is the account of a one - time true believer whose decade in the industry turned him into a heretic.Sinclair worked with several microfinance institutions and funds as he traveled from Mexico to Mongolia, with Nigeria, Holland, and Mozambique in between.

He couldn't help but notice that even with a booming 70 billion dollar industry on their side, the poor didn't seem any better off in practice.

Sinclair details his discovery of several scandals, one of the most disturbing involving a large African microfinance institution of questionable legality that charged interest rates in excess of 100 percent per year, and whose investors and supporters included some of the most celebrated leaders of the microfinance sector.

Sinclair's objections were first met with silence, then threats, attempted bribery, and a court case, and eventually led him to become a principle whistleblower in a sector that had lost its soul.Microfinance can work - Sinclair describes moving experiences with several ethical and effective organizations and analyzes what made them different.

But without the fundamental reforms that Sinclair recommends here, microfinance will remain an "investment opportunity" that will leave the poor with hollow promises and empty pockets.