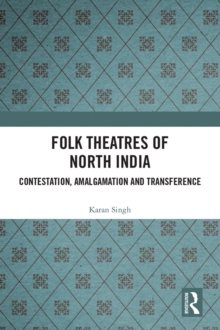 This book examines folk theatres of North India as a unique performative structure, a counter stream to the postulations of Sanskrit and Western realistic theatre. In focusing on their historical, social and cultural imprints, it explores how these theatres challenge the linearity of cultural history and subvert cultural hegemony. The book looks at diverse forms of theatre such as svangs, nautanki, tamasha, all with conventions like open performative space, free mingling of spectators and actors, flexibility in roles and genres, etc. It discusses the genesis, history and the independent trajectory of folk theatres; folk theatre and Sanskrit dramaturgy; cinematic legacy; and theatrical space as performance besides investigating causes, inter-relations within socio-cultural factors, and the performance principles underlying them. It shows how these theatres effectively contest delimitation of human creative impulses (as revealed in classical Sanskrit theatre) from structuring as also of normative impulses of religion and culture, while amalgamating influences from Western theatre, newly-rising religious reform movements of 19th century India, tantra and Bhakti. It further highlights their ability to adapt and reinvent themselves in accordance with spatial and temporal transformations to constitute an important anthropological layer of Indian society.

Comprehensive and empirically rich, this book will be an essential read for scholars and researchers of cultural studies, theatre, film and performance studies, sociology, political studies, popular culture, and South Asian studies.