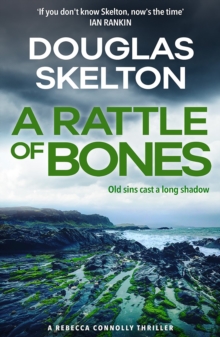 Death is her shadow

Part of the A Rebecca Connolly thriller series

'[a] compelling thriller, laced with dark humour' - Sunday Post In 1752, Seamus a'Ghlynne, James of the Glen, was executed for the murder of government man Colin Campbell.

He was almost certainly innocent. When banners are placed at his gravesite claiming that his namesake, James Stewart, is innocent of murder, reporter Rebecca Connolly smells a story.

The young Stewart has been in prison for ten years for the brutal murder of his lover, lawyer and politician Murdo Maxwell, in his Appin home.

Rebecca soon discovers that Maxwell believed he was being followed prior to his murder and his phones were tapped. Why is a Glasgow crime boss so interested in the case?

As Rebecca keeps digging, she finds herself in the sights of Inverness crime matriarch Mo Burke, who wants payback for the damage caused to her family in a previous case. Set against the stunning backdrop of the Scottish Highlands, A Rattle of Bones is a tale of injustice and mystery, and the echo of the past in the present.