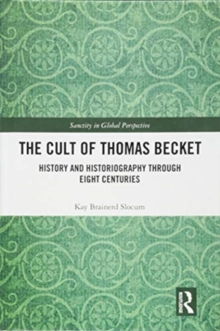 The cult of Thomas Becket : history and historiography through eight centuries

Part of the Sanctity in Global Perspective series

On 29 December, 1170, Thomas Becket, Archbishop of Canterbury, was brutally murdered in his own cathedral.

News of the event was rapidly disseminated throughout Europe, generating a widespread cult which endured until the reign of Henry VIII in the sixteenth century, and engendering a fascination which has lasted until the present day.

The Cult of Thomas Becket: History and Historiography through Eight Centuries contributes to the lengthy debate surrounding the saint by providing a historiographical analysis of the major themes in Becket scholarship, tracing the development of Becket studies from the writings of the twelfth-century biographers to those of scholars of the twenty-first century. The book offers a thorough commentary and analysis which demonstrates how the Canterbury martyr was viewed by writers of previous generations as well as our own, showing how they were influenced by the intellectual trends and political concerns of their eras, and indicating how perceptions of Thomas Becket have changed over time.

In addition, several chapters are devoted a discussion of artworks in various media devoted to the saint, as well as liturgies and sermons composed in his honor. Combining a wide historical scope with detailed textual analysis, this book will be of great interest to scholars of medieval religious history, art history, liturgy, sanctity and hagiography.