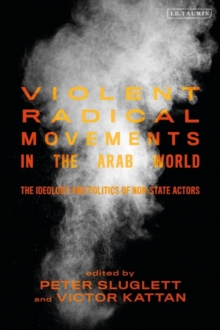 Violent radical movements in the Arab world : the ideology and politics of non-state actors

Violent non-state actors have become almost endemic to political movements in the Middle East and the Horn of Africa.

This book examines why they play such a key role and the different ways in which they have developed.

Placing them in the context of the region, separate chapters cover the organizations that are currently active, including: The Muslim Brotherhood, The Islamic State in Iraq and Syria, Jabhat al-Nusra, Hamas, Hizbullah, the PKK, al-Shabab and the Huthis.

The book shows that while these groups are a new phenomenon, they also relate to other key factors including the 'unfinished business' of the colonial and postcolonial eras and tacit encouragement of the Wahhabi/Salafi/jihadi da'wa by some regional powers.

However, by examining their origins, their supporters and their motivations, this book helps explain their ubiquity in the region.