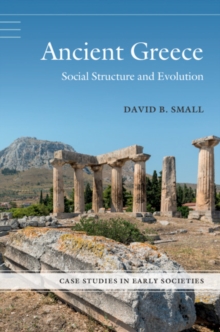 Part of the Case Studies in Early Societies series

This book examines the development of ancient Greek civilization through a path-breaking application of social scientific theories.

David B. Small charts the rise of the Minoan and Mycenaean civilizations and the unique characteristics of the later classical Greeks through the lens of ancient social structure and complexity theory, opening up new ideas and perspectives on these societies.

He argues that Minoan and Mycenaean institutions evolved from elaborate feasting, and that the genesis of Greek colonization was born from structural chaos in the eighth century.

Small isolates distinctions between Iron Age Crete and the rest of the Greek world, focusing on important differences in social structure.