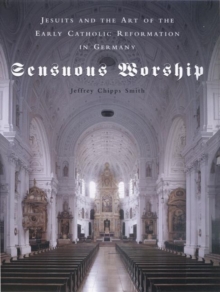 Sensuous worship : Jesuits and the art of the early Catholic reformation in Germany

Princeton University Press
0691090726 / 9780691090726
Hardback
246.95094309031
30/11/2002
Out of print
United States
29 cm ix, 261 p. : ill., map, ports.
research & professional  Learn More academic/professional/technical
To the burgeoning literature on the Jesuits, Smith adds a powerful and well-considered case study that makes the reader aware that the revival of Catholicism in Germany was anything but inevitable. This is a timely, well-researched, and readable book. -- Larry Silver, University of Pennsylvania

When the Jesuits entered Germany in the 1540s, the Protestant Reformation was on the verge of obliterating a Catholic Church already in tatters.

It provides the first comprehensive treatment of the Jesuits' poorly understood but remarkable revitalization of German religious art and culture - an accomplishment that would guide the direction of both religious life and subsequent German baroque art.

Jeffrey Chipps Smith describes how the Jesuits, partly through their rich contributions to art, catalyzed the re-formation of German Catholic religious identities.

Their diverse missions included the erection or renovation of over thirty major churches between 1570 and 1648.

Aided by wealthy benefactors and bringing in artists from across Europe, the Jesuits built imposing and beautifully appointed churches, including St.

Michael's in Munich and Maria Himmelfahrt's in Cologne.

Designed to impress and to teach, these structures reflect Jesuit commitments to the spirituality of St.Ignatius of Loyola, who emphasized individual responsibility for salvation.

The Jesuits embraced the affective potential of art to transform the individual by stimulating the senses to promote memory, intellect, and will. "Sensuous Worship" shows how, by doing so, they revived German Catholicism and had lasting effects on German art.