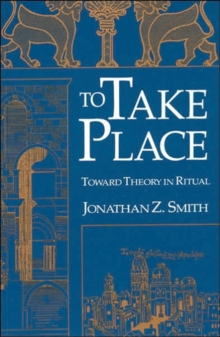 To take place : toward theory in ritual

In this broad-ranging inquiry into ritual and its relation to place, Jonathan Z.

Smith prepares the way for a new approach to the comparative study of religion.

Smith stresses the importance of place?in particular, constructed ritual environments?to a proper understanding of the ways in which "empty" actions become rituals.

He structures his argument around the territories of the Tjilpa aborigines in Australia and two sites in Jerusalem?the temple envisioned by Ezekiel and the Church of the Holy Sepulchre.

The first of these locales?the focus of one of the more important contemporary theories of religious ritual?allows Smith to raise questions concerning the enterprise of comparison.

His close examination of Eliade's influential interpretation of the Tjilpa tradition leads to a powerful critique of the approach to religion, myth, and ritual that begins with cosmology and the category of "The Sacred."In substance and in method, To Take Place represents a significant advance toward a theory of ritual.

It is of great value not only to historians of religion and students of ritual, but to all, whether social scientists or humanists, who are concerned with the nature of place. "This book is extraordinarily stimulating in prompting one to think about the ways in which space, or place, is perceived, marked, and utilized religiously. . . . A provocative example of the application of humanistic geography to our understanding of what takes place in religion."?Dale Goldsmith, Interpretation