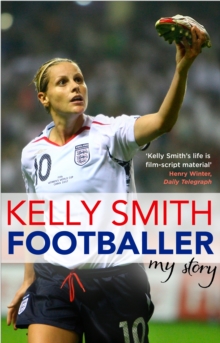 All Kelly Smith ever wanted to be was a footballer.

Blessed with brilliant talent which she honed with hours of practice, it was soon clear to all who saw her that Kelly was the best women's footballer that this country had ever produced.

Yet for this shy girl from Watford, it would be a long and difficult journey to the pinnacle of the world game, and one which would involve the hardest of challenges. After starting drinking to mask her loneliness thousands of miles from home in the United States, a series of career-threatening injuries led to severe depression and a battle with alcoholism.

But with the fighting spirit that was so essential on her path to be Britain's first women's professional player, Kelly bounced back to inspire Arsenal to countless trophies and become England's record goalscorer. Footballer: My Story is the inspirational tale of a woman with a drive to succeed.

It is the unique inside story of a star in a sport enjoyed by millions yet often not granted the recognition it deserves. And as she nears the end of a glittering playing career, it is the story of how Kelly Smith became what she always wanted to be.