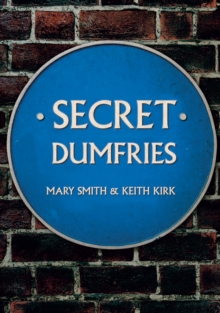 Part of the Secret series

Dumfries, in south-west Scotland, has a long history, much of it well recorded.

However, as with most places there are more than a few secrets hidden away.

First referred to as the Queen of the South by local poet David Dunbar in 1857, the name stuck and was later adopted by the local football team.

Not many know that this makes it the only football team in the world mentioned in the Bible.

Darker aspects of the town's history include the burning of nine witches on the Whitesands in 1659 and the last public hanging of a woman in Scotland, Mary Timney, was held in Dumfries in 1862.

There are tales of plague victims being exiled to Scabbit Isle, of murderers and grave robbers.

Not all its secrets are so dark: there's Patrick Miller and his introduction of turnips courtesy of King Gustav III of Sweden, and the exiled Norwegian Army making its home in Dumfries during the Second World War. And what is the significance of the finials depicting telescopes and anchors on the railings along the Whitesands?Local author Mary Smith and photographer Keith Kirk take the reader on a fascinating journey through the town's past, unearthing tales of intrigue and grisly goings-on as they provide a glimpse into some of the lesser-known aspects of the town's history.