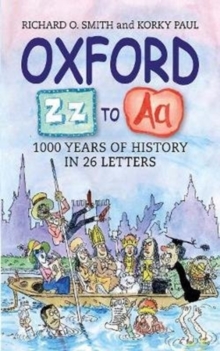 Discover Oxford's amazing stories, from Z for Zoo (yes, Oxford once had a zoo until three dangerous animals escaped) to A for Answers (there's a quiz question for every letter). Revel in true tales of Oxford's oddballs, pranksters, poets, murderers, explorers, scientists, actors, criminals and politicians (there may be some crossover here).

Learn and laugh about Oxford's curious customs and peculiar protocols.

Its eccentric academics and funny fellows. Its ancient university and even older town - and how they've often come to blows. Find answers to the following questions: who burned down half of Oxford cooking a pig?

Which plant has killed more people than any other, according to Oxford boffins?

Who went to sea as a pirate after graduating from Oxford?

Which gruesome body part did Lord Nuffield keep pickled in a jar in his bedroom?

Which college was put up for sale on eBay by rival students?

Taking the reader on a journey through Oxford's colourful past, this book brings to life a city known around the world.

With quirky illustrations and comic tales, it offers a reading adventure that's informative and fun.