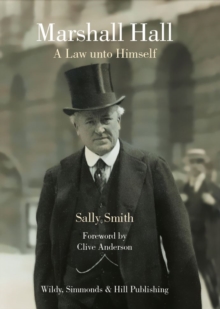 Marshall Hall : a law unto himself

By: Smith, Sally,  Anderson, Clive(Foreword by)

Sir Edward Marshall Hall KC saved more people from the hangman's noose than any other known barrister. In an age of inadequate defence funding, minimal forensic evidence, a rigid moral code making little allowance for human passion and a reactionary judiciary, his only real weapons were his understanding of human psychology and the power of his personality. His charismatic oratory and film star profile made him an Edwardian celebrity. Jurors collapsed and judges wept at the overwhelming power of his performances. Thousands congregated to await the verdicts in the trials in which he appeared for the defence. Curtains were brought down in West End theatres to announce the acquittals he secured. His famous trials included the Camden Town murder, Seddon the Poisoner, the Brides in the Bath, the Green Bicycle Murder and the Murder at the Savoy.

As a result of his oratory in these he was adulated as an entertainer, his performances greeted with the same relish as those by the great actors; but he was also loved as a champion of the underdog, who almost single-handedly introduced compassion in to the Edwardian legal system.

No other barrister in any age can claim such celebrity, nor such public adoration and affection. Meticulously researched, Marshall Hall: A Law unto Himself is the first modern biography of a complex and influential man and, as a result of access to new material:* Sets the legendary barrister in his social, historical and political context. * Reveals the sensational private life of the man behind the public figure, the two turbulent marriages, and the mistresses. * Tells the full story of his first wife's death. * Examines his magnetic oratory and extraordinary fame from a modern perspective.