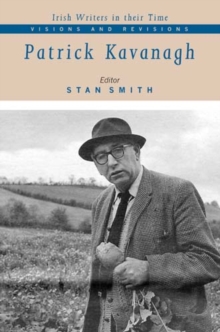 Part of the Visions and Revisions: Irish Writers in Their Time series

This volume offers a comprehensive account by a range of established scholars of the richness and variety of Patrick Kavanagh's work both in prose and verse, and situates his writings in the social and cultural contexts of the work-a-day Ireland which emerged from the heroics of nationalist insurrection and civil war.

The distinguished scholars who contribute to this account bring a diverse range of approaches and perspectives to offer a fuller understanding of his work.Patrick Kavanagh has for long represented an alternative vision of Irish poetry to the high melodrama and attitudinizing of W.

B. Yeats. Low key and apparently equable in tone, though often revealing a sly acerbic wit, Kavanagh's verse has represented a domestic, though not domesticated, alternative to the high-falutin' rhetoric of the Yeatsian mode, pitching itself to the quotidian world of de Valera's 'Catholic Republic', famously extolling the virtues of the 'parochial' in contrast to the siren call of the cosmopolitan and metropolitan, like Joyce finding its inspiration in the streets and alleys of a middle and lower class Dublin and the stony acres, literal and metaphoric, of a sparse rural economy, and, like Flann O'Brien, preferring the bicycle as a mode of poetic transport to the high horse of the 'last Romantics'.

It confirms Seamus Heaney's claim that Kavanagh 'gave single-handed permission for Irish poets to trust and cultivate their native ground and experience.'