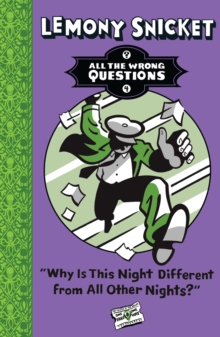 "Why is this night different from all other nights?"

"Why is this night different from all other nights?"

Part of the All the Wrong Questions series

Before he wrote 'A Series of Unfortunate Events', before the Baudelaires became orphans, even before the invention of Netflix, Lemony Snicket asked all the wrong questions.

Apprentice investigator Lemony Snicket was on the train, and he thought that if he solved the murder he could save the town. In the tradition of great storytellers, from Dickens to Dahl, comes an exquisitely dark comedy that is both literary and irreverent.

You'll laugh only if you find humour in gothic and mysterious things involving detectives and crime solving. Lemony's other literary outings in 'A Series of Unfortunate Events' have sold 60 million copies worldwide and been made into a Hollywood film starring Jim Carrey and a Netflix series starring Neil Patrick Harris.

These regrettable developments mean that millions of fans have found out about the dreadful plight of the Baudelaire orphans, but you do not have to.

You have been warned. Have you read all four mysterious titles in the Wrong Questions series? 'Who Could That Be at the This Hour?' 'When Did You Last See Her?' 'Shouldn't You Be in School?' 'Why is This Night Different from All Other Nights?' Author Lemony Snicket was born before you were and is likely to die before you as well.

He was born in a small town where the inhabitants were suspicious and prone to riot.

He grew up near the sea and currently lives beneath it.

Until recently, he was living somewhere else. He is a broken man, wracked with misery and despair as a result of writing 'A Series of Unfortunate Events'.

He spends his days wandering the countryside weeping and moaning and his evenings eating hastily-prepared meals. Artist Seth has portrayed suspicious circumstances and shady characters in much of his work.

He is a multi-award-winning cartoonist, author and artist, whose works include Palookaville and Clyde Fans.