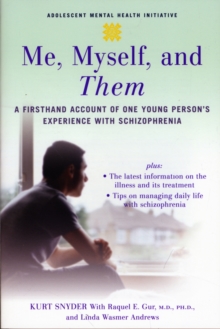 Me, myself, and them : a firsthand account of one young person's experience with schizophrenia

During his second semester at college, Kurt Snyder became convinced that he was about to discover a fabulously important mathematical principle, spending hours lost in daydreams about numbers and symbols.

In time, his thoughts took a darker turn, and he became preoccupied with the idea that cars were following him, or that strangers wanted to harm him.

Kurt's mind had been hijacked by schizophrenia, a severe mental disorder that typically strikes during the late teenor young adult years.

In Me, Myself, and Them, Kurt, now an adult, looks back from the vantage point of recovery and eloquently describes the debilitating changes in thoughts and perceptions that took hold of his life during his teens and twenties.

As a memoir, this book is remarkable for its unvarnished look at the slow and difficult process of coming back from severe mental illness.

Yet Kurt's memoir is only half the story. With the help of psychiatrist Raquel E. Gur, M.D., Ph.D., and veteran sciencewriter Linda Wasmer Andrews, Kurt paints the big picture for others affected by adolescent schizophrenia.

Drawing on the latest scientific and medical evidence, he explains how to recognize warning signs, where to find help, and what treatments have proved effective.

Kurt also offers practical advice on topics ofparticular interest to young people, such as suggestions on managing the illness at home, school, and work, and in relationships with family and friends. Part of the Adolescent Mental Health Initiative series of books written specifically for teens and young adults, My, Myself, and Them offers hope to young people who are struggling with schizophrenia, helping them to understand and manage the challenges of this illness and go on to lead healthy lives.