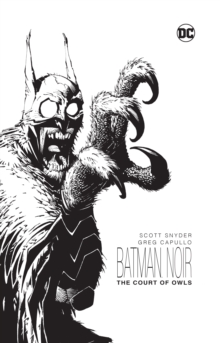 The Court of Owls

Part of the Batman noir series

Presented in black and white inks from artists Greg Capullo and Jonathan Glapion, BATMAN NOIR: THE COURT OF OWLS presents Scott Snyder's now-legendary storyline in an all-new format! Batman had heard the tales of Gotham City's Court of Owls.

Meeting in the shadows and using the nocturnal bird of prey as their calling card, the members of this powerful cabal are the true rulers of Gotham. But the Dark Knight dismissed the stories as rumors and old wives' tales.

Gotham was his city. Until now. A brutal assassin is sinking his razor-sharp talons into the city's best and brightest, as well as its most dangerous and deadly.

If the dark legends are true, his masters are more powerful predators than the Batman could ever imagine--and their nests are everywhere... From the superstar team of writer Scott Snyder (AMERICAN VAMPIRE) and Greg Capullo (Spawn), BATMAN: COURT OF OWLS is a soaring saga of mystery and terror that kicked off one of the decade's most successful comic book runs!

This stunning Absolute [W1] edition collects BATMAN #1-11, as well as character sketches, the full script and pencils to BATMAN #1 and afterword by Scott Snyder. Presented in gritty black and white, BATMAN NOIR: THE COURT OF OWLS (collecting BATMAN #1-11) is a soaring saga of mystery and terror that kicked off one of the decade's most successful comic book runs.[W2] [W1]Is this correct for a Noir edition? [W2]Same phrase used in previous paragraph.