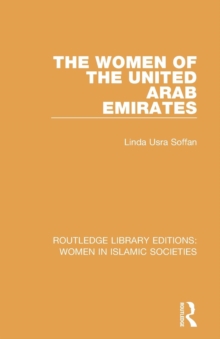 The women of the United Arab Emirates

First published in 1980, this book looks at the factors which influenced the position held by women in the United Arab Emirates in the second half of the 20th century.

It argues that Islamic Law has granted women rights and privileges in the spheres of family life, marriage, education and economic pursuits, which aim at improving their status in society.

However, due to the interpretations of various religious scholars, influenced by local traditions and social trends, women have often not been given these rights, particularly in family life and marriage.

In contrast, the book also explores how the wealth brought about by the discovery of oil has served to further strengthen the position of UAE women, principally in the fields of education, social affairs and economic activity.

This book will be of interest to those studying women in Islamic society and modernisation in the Middle East.