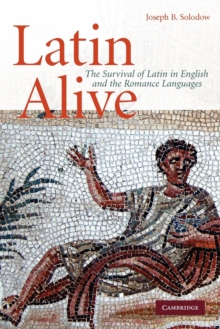 Latin alive : the survival of Latin in English and the Romance languages

In Latin Alive, Joseph Solodow tells the story of how Latin developed into modern French, Spanish, and Italian, and deeply affected English as well.

Offering a gripping narrative of language change, Solodow charts Latin's course from classical times to the modern era, with focus on the first millennium of the Common Era.

Though the Romance languages evolved directly from Latin, Solodow shows how every important feature of Latin's evolution is also reflected in English.

His story includes scores of intriguing etymologies, along with many concrete examples of texts, studies, scholars, anecdotes, and historical events; observations on language; and more.

Written with crystalline clarity, this book tells the story of the Romance languages for the general reader and to illustrate so amply Latin's many-sided survival in English as well.