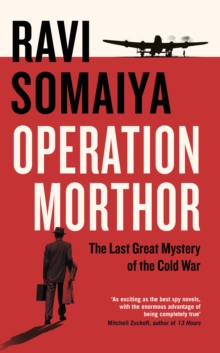 Operation Morthor : the last great mystery of the Cold War

'One of the mysteries I've long been fascinated by, and I am so grateful that Ravi Somaiya has cracked it open so brilliantly' David Grann, author of Killers of the Flower MoonA PLANE CRASH IN THE JUNGLE. A LEGENDARY STATESMAN DEAD. A TRAGIC ACCIDENT... OR THE ULTIMATE CONSPIRACY?For nearly sixty years, the circumstances surrounding the death of renowned diplomat Dag Hammarskjoeld have remained one of the Cold War's most tightly guarded secrets.

Now, with exclusive evidence, investigative journalist Ravi Somaiya finally uncovers the truth. In 1961 the Congo was in crisis, fragmented and at war with itself.

The streets of Leopoldville, the capital, were crawling with CIA operatives, MI6 agents and Soviet infiltrators.

Belgian colonialists, Rhodesian white supremacists and corporate mercenaries massed in the south of the country.

The chaos conspired to make it one of the most dangerous places on earth. UN Secretary General Dag Hammarskjoeld, the man John F.

Kennedy called 'the greatest statesman of our century' flew into the maelstrom.

He was an idealist. The Congo's best hope for peace and independence. But en route to a diplomatic summit to reunite the country, Hammarskjoeld's plane mysteriously disappeared.

Soon afterward he was discovered dead in the smoking wreckage, an Ace of Spades playing card placed on his body. A riveting work of investigative journalism based on new evidence, recently revealed first-hand accounts, and groundbreaking interviews, Operation Morthor reveals the plot behind one of the longest-standing murder mysteries of the Cold War, with dark implications for governments and corporations alike.