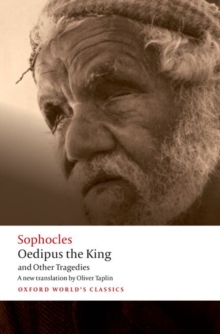 Oedipus the king and other tragedies

Oedipus the King * Aias * Philoctetes * Oedipus at ColonusSophocles stands as one of the greatest dramatists of all time, and one of the most influential on artists and thinkers over the centuries. In these four tragedies he portrays the extremes of human suffering and emotion, turning the heroic myths into supreme works of poetry and dramatic action. Oedipus the King follows Oedipus, the 'man of sorrow', who has unwittingly chosen to enact his prophesied course by murdering his father and marrying his mother. In Aias, the greatwarrior confronts the harrowing humiliation inflicted upon him, while Philoctetes sees a once-noble hero nursing his resentment after ten years of marooned isolation. In Oedipus at Colonus the blind Oedipus, who has wandered far and wide as a beggar, finally meets his mysterious death. These original and distinctive verse translations convey the vitality of Sophocles' poetry and the vigour of the plays in performance. Each play is accompanied by an introduction and substantial notes on topographical and mythical references and interpretation. ABOUT THE SERIES: For over 100 years Oxford World's Classics has made available the widest range of literature from around the globe.