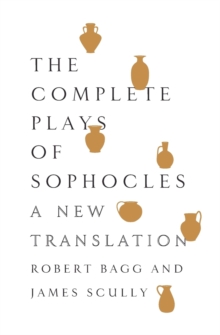 The complete plays of Sophocles : a new translation

Sophocles was the dominant Athenian playwright of the fifth century BCE.

His best-known work, the three-play "Oedipus cycle" ("Oedipus the King", "Oedipus at Kolonos", and "Antigone"), traces three generations of a family ravaged by the inscrutably vindictive god Apollo, who manipulates his victims into committing unforgivable acts of incest, patricide, and kin murder.

In "Elektra and the Women of Trakhis" Sophocles portrays two women who act righteously to save themselves and support those they love, yet do so in ways that betray and diminish their own humanity.

In his less familiar but riveting war-zone dramas, "Philoktetes" and "Aias", Sophocles works through the political and moral crises of war-weary, traumatized soldiers-a fact of life not only for the Trojan War-era protagonists of these plays but for war veterans and their families in Sophocles' Athens.

All are caught up in situations we recognize - including the feeling of being played by powers beyond our control.

The effectiveness and timeliness of Sophocles' dramas depend on translations such as these to resonate, intellectually and emotionally, with a contemporary audience. For a new generation entering the turbulent arena of ancient Greek drama, translators Robert Bagg and James Scully have produced a vivid, dynamic, and eminently readable translation in "The Complete Plays of Sophocles".