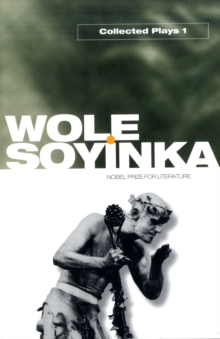 Part of the Collected plays series

The Nigerian writer Wole Soyinka has been hailed as 'one of the finest poetic playwrights who have ever written in English' (Martin Esslin) and 'a writer of genius' (Irish Times).

The five plays in this collection are linked by their concern with the spiritual and the social, with belief and ritual as integrating forces for social cohesion.

A Dance of the Forests (1960), a confrontation between the living and the dead, between history and reality; The Swamp Dwellers (1961), a tale of perilous dependence on the favour of the gods; The Strong Breed (1963), a play of expiation, all take place in Africa.

So also does The Road (1965), 'a rich and beautiful tragedy' (Times Literary Supplement) The most recent work, an adaptation of The Bacchae of Euripides (1973), remains set in and around the Thebes of ancient Greece, but draws deeply on Africa and the themes of the earlier plays in this book.

In all these plays - whether concerned with the corruption of urban life or the power of superstition - Soyinka's language and imagination transcend the plays' immediate social contexts.