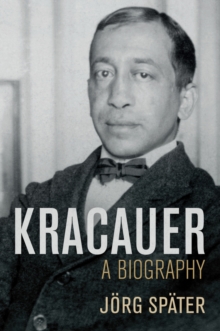 Siegfried Kracauer was one of the most important German thinkers of the twentieth century.

His writings on Weimar culture, mass society, photography and film were groundbreaking and they anticipated many of the themes later developed members of the Frankfurt School and other cultural theorists. No less remarkable were the circumstances under which he made these contributions.

After his early years as a journalist in Germany, the rise of the Nazis forced Kracauer into exile - first in Paris and then, after a protracted flight via Marseilles and Lisbon, to the United States.

The existential challenges, personal losses and unrelenting hardship Kracauer faced during these years of exile formed the backdrop against which he offered his acute observations of modern life. Joerg Spater provides the first comprehensive biography of this extraordinary man.

Based on extensive archival research, Spater's biography expertly traces the key influences on Kracauer's intellectual development and presents his most important works and ideas with great clarity.

At the same time, Spater ably documents the intensity of Kracauer's personal relationships, the trauma of his flight and exile, and his embrace of his new homeland, where, finally, the 'groundlessness' of refugee existence gave way to a more stable life and, with it, some of the intellectually most fruitful years of Kracauer's career. The result is a vivid portrait of a man driven both by an urge to capture reality - to attend to the things that are 'overlooked or misjudged', that still 'lack a name', as he put it - and by a need to find his place in a hostile, threatening world.