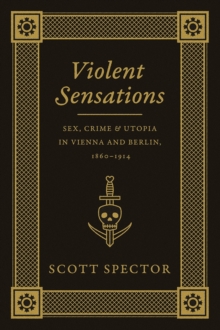 Around the turn of the twentieth century, Vienna and Berlin were centers of scientific knowledge, accompanied by a sense of triumphalism and confidence in progress.

Yet they were also sites of fascination with urban decay, often focused on sexual and criminal deviants and the tales of violence surrounding them.

Sensational media reports fed the prurient public's hunger for stories from the criminal underworld: sadism, sexual murder, serial killings, accusations of Jewish ritual child murder--as well as male and female homosexuality. In Violent Sensations, Scott Spector explores how the protagonists of these stories--people at society's margins--were given new identities defined by the groundbreaking sciences of psychiatry, sexology, and criminology, and how this expert knowledge was then transmitted to an eager public by journalists covering court cases and police investigations.

The book analyzes these sexual and criminal subjects on three levels: first, the expertise of scientists, doctors, lawyers, and scholars; second, the sensationalism of newspaper scandal and pulp fiction; and, third, the subjective ways that the figures themselves came to understand who they were.

Throughout, Spector answers important questions about how fantasies of extreme depravity and bestiality figure into the central European self-image of cities as centers of progressive civilization, as well as the ways in which the sciences of social control emerged alongside the burgeoning emancipation of women and homosexuals.