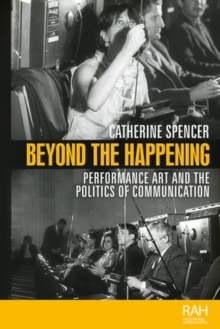 Beyond the Happening : Performance Art and the Politics of Communication

Beyond the Happening uncovers the heterogeneous, uniquely interdisciplinary performance-based works that emerged in the aftermath of the early Happenings.

By the mid-1960s Happenings were widely declared outmoded or even 'dead', but this book reveals how many practitioners continued to work with the form during the late 1960s and 1970s, developing it into a vehicle for studying interpersonal communication that simultaneously deployed and questioned contemporary sociology and psychology.

Focussing on the artists Allan Kaprow, Marta Minujin, Carolee Schneemann and Lea Lublin, it charts how they revised and retooled the premises of the Happening within a wider network of dynamic international activity.

The resulting performances directly intervened in the wider discourse of communication studies, as it manifested in the politics of countercultural dropout, soft power and cultural diplomacy, alternative pedagogies, sociological art and feminist consciousness-raising. -- .