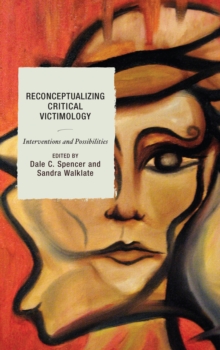 Since the 1960s, the field of victimology has developed into a variegated discipline with its own theoretical and methodological traditions.

Since then, the field has remained conceptually stale and with few a few exceptions there has not been a considerable lacuna of works from a critical perspective.

Reconceptualizing Critical Victimology: Interventions and Possibilities provides a rejoinder to the two aforementioned texts and demonstrate how critical victimology can be reconceptualized, where interventions can be made in this victimological paradigm, and possibilities for future theorizing and research in this provocative field.

Reconceptualizing Critical Victimology includes eleven papers on the forms of victimization and issues pertinent to victims written by leading and emerging international scholars in the field of critical victimology.

It is interdisciplinary in scope and contains contributions from leading and emergent international scholars on victims and victimization.

Reconceptualizing Critical Victimology serves as a crucible to demonstrate the complexities of and the multitude of factors that interact to complicate victim status, the vagaries of victim response, and the phenomenology of violence and victimization.