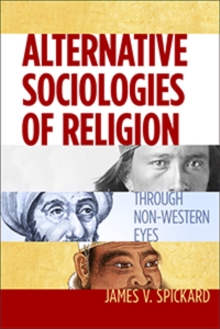 Uncovers what the sociology of religion would look like had it emerged in a Confucian, Muslim, or Native American culture rather than in a Christian oneSociology has long used Western Christianity as a model for all religious life.

As a result, the field has tended to highlight aspects of religion that Christians find important, such as religious beliefs and formal organizations, while paying less attention to other elements. Rather than simply criticizing such limitations, James V.

Spickard imagines what the sociology of religion would look like had it arisen in three non-Western societies. What aspects of religion would scholars see more clearly if they had been raised in Confucian China? What could they learn about religion from Ibn Khaldun, the famed 14th century Arab scholar? What would they better understand, had they been born Navajo, whose traditional religion certainly does not revolve around beliefs and organizations? Through these thought experiments, Spickard shows how non-Western ideas understand some aspects of religions-even of Western religions-better than does standard sociology. The volume shows how non-Western frameworks can shed new light on several different dimensions of religious life, including the question of who maintains religious communities, the relationships between religion and ethnicity as sources of social ties, and the role of embodied experience in religious rituals.

These approaches reveal central aspects of contemporary religions that the dominant way of doing sociology fails to notice. Each approach also provides investigators with new theoretical resources to guide them deeper into their subjects. The volume makes a compelling case for adopting a global perspective in the social sciences.